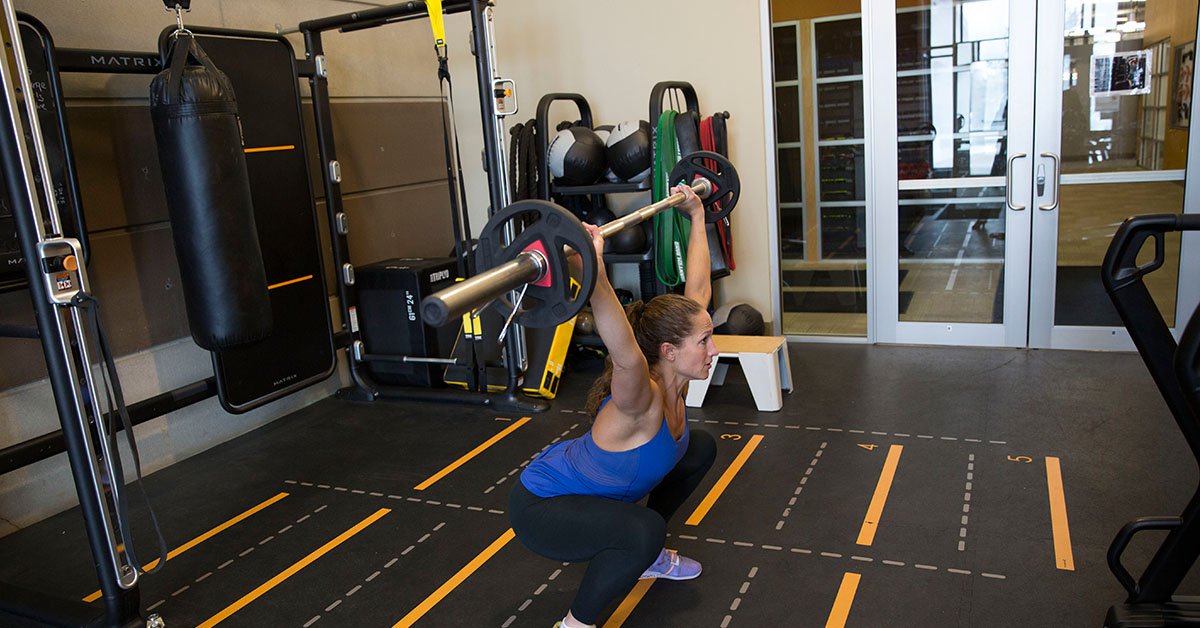 Olympic Weightlifting, also simply called Weightlifting, is growing in popularity, due largely to its inclusion in functional fitness style workouts.  The Snatch and Clean and Jerk (more on these later) are the only lifts included as competitive events in the sport of Weightlifting, though home and functional movement workouts include variations of these lifts.  This style differs from other forms of weight training such as Powerlifting, which emphasizes isolation of specific muscle groups in isolated movement lifts, and Body Building, which is directed at hypertrophy (muscle growth) with low body fat.  The Olympic lifts combine strength with explosive power and precise technique to create a multi-phased athletic movement that is also aligned with functional training goals.
Weightlifting movements are complex and mastering them will require rehearsal of technique as well as building muscular strength.  Training with a coach that specializes in weightlifting is well worth the money and time spent.  Many functional training gyms provide a foundational course that will familiarize you with these lifts for preparation to use them in workouts at home or participation in programming at a gym. These courses will provide you with a foundation in these lifts, which you can revisit with further coaching and practice.  Both the Clean and Jerk and the Snatch involve lifting a bar from the ground and raising it to an overhead position.  The variations in these lifts involve the grip and the means of raising the bar to this position.
Find a barbell for this workout here: https://www.johnsonfitness.com/weights/barbells

Set Up: The Snatch is characterized by a wide hand position and relatively straight arms as the bar moves into the overhead position. Your grip for the Snatch will be wide enough to allow the bar to hang at approximately the level of your hip crease when standing with your arms fully straightened, though very long limbed athletes may move their grip inwards slightly from that point.  You can approximate your Snatch grip by placing PVC at the outside of one shoulder, extending an arm parallel to the ground and measuring to your fingertips on the opposite hand.  That distance is a starting point for determining your Snatch grip.   Preparation for the Snatch begins with the bar on the ground, your hands on the bar in a Snatch position, hips low and chest up.

First Pull: During the first pull of the lift (the deadlift), the bar will travel from the ground to approximately the upper thigh.  Weight will be grounded in the front of your heel and the bar should travel as close to the body as possible.

Second Pull: The second pull of the lift (the shrug) will begin the explosive movement required to lift the bar overhead.  During this time, weight shifts forward to the ball of the foot (as though jumping) while your shoulders shrug upwards and hips extend forward.  This movement assists in bringing the bar closer to chest height.

Third Pull: The final pull of the lift requires pulling yourself under the bar finishing in an overhead squat position.  The lift is completed when you are able to stand up in that position.  While a heavy Snatch lift will required a full overhead squat in order to catch the weight, at lighter weights a Power Snatch may be used, during which the final pull ends with hips at higher than knee level.

Variations of the Snatch may also be seen in functional fitness style workouts, such as a Hanging Snatch, which does not require lifting from the ground and begins at thigh height, or a Power Snatch, which does not require a full Squat at the end.  These techniques continue to emphasize explosive strength and technique, can be used for training and lifting at lighter weights, and are frequently easier to master.  Practicing the Snatch with a long piece of PVC pipe is helpful in practicing the three phases of the lift and working through the required technique.  Using a bar to work the Snatch from the Hang position is also helpful in mastering the second and third pulls of the lift, although it can be difficult to fully master the third pull without adequate weight to push back against during the overhead squat movement.  Ready to put in the effort it takes to master your Snatch?

Here’s a full workout to get you started.

About the writer: Joli Guenther is a certified personal trainer, yoga instructor and clinical social worker practicing in and around Madison, Wisconsin. Learn more about Joli.